FileZilla Pro, the version dedicated to users professional, recently turned a year, and we decided to zoom back over and share with you some bits of that.

We started small. FileZilla Pro was launched on the 8th of May 2017, initially only for Windows. Knowing that upselling a community is bad and wrong, both from a social and business point of view, and we proceeded very cautiously. Instead of pushing FileZilla Pro we decided to display just a simple comparison table at download times, to serve and inform FileZilla user base about our brand new flagship product.

While only few users were opting for FileZilla Pro, it was refreshing to see that our unobtrusive marketing approach didn’t receive any criticism, although we definitely needed a new funnel.

So after the first few weeks we launched a new website entirely dedicated to the sale of this version, completely separated from the original project website.

We started investing on advertising, but bidding on the keywords of interest turned out being pretty hard, and we didn’t want to raise the product’s price just to afford marketing campaigns. Eventually we decided to not invest in advertising, laser focusing on adding new features and promoting them.

A key milestone was the inclusion of FileZilla Pro in the Mac Apple Store, which now accounts for about two-thirds of total sales, confirming that, despite Apple’s market penetration is lower, the Mac App Store is definitely the most effective marketplace to sell software.

Recently we announced support for Google Cloud Storage, demanded loudly by our customers, who have now reached the remarkable number of 25 thousand units. We learned about what people from from FileZilla Pro because we administered a questionnaire.

Our first question was aimed at assessing the loyalty of our customers (Net Promoter Score.)

The results exceeded our most optimistic expectations: the survey provided a picture of the situation where our customers turn out to be “promoters”, with a value of 9.5 on a scale of 1-10.

We also asked our customers to choose some words to describe FileZilla Pro, and it has been inspiring to learn that over 80% of respondents find it useful, and nobody said it’s overpriced.

We also learned that some users had problems to use it, hence we decided to create a manual that will complement the online documentation and tutorials, so that our customers will have both a quick reference guide and an advanced documentation at their disposal. 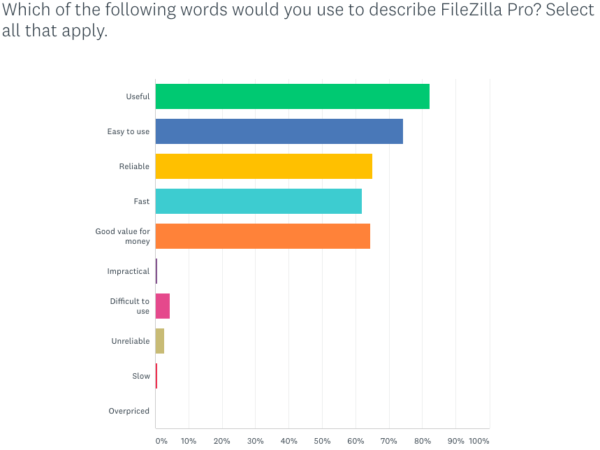 We also asked how people liked our first ‘pro’ feature (Amazon S3 support), and we got a lot of interesting feedback, ranging from enthusiastic comments –  “Thank you for creating this product! It saved me hours of messing with uploading files via the Amazon web tool.” – to request for enhancing S3 support (something we’re already working on).

Considering FileZilla has been distributed for free under an Open Source license for over 15 years, when we decided to sell a pro version we didn’t expect to sell 25k copies so fast!

We knew about the “zero price” effect – suggesting that making a product free increases the intrinsic value of an asset, a pulling power that vanishes as soon as the price also becomes slightly above zero – still we believed that targeting the same reference market with a paid version, adding the right features, could produce positive results, and we did it.

We wish to thank all our customers, and we want them to know the best is still to come.

While we are at the very beginning of our journey, product sales represent already an important fraction of our revenues, and we stay committed to release frequently new versions with support for a new protocol or an important functionality.